The Yoruba Tribe By Alain MENJADEU 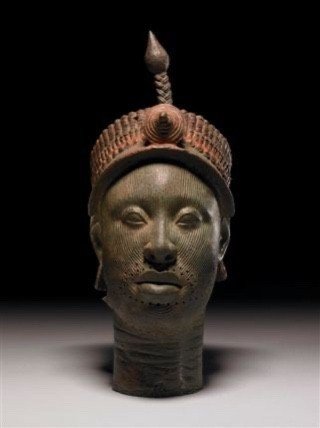 This month our topic will be about “YORUBA PEOPLE”. Yoruba are an ethnic group that inhabit most of Western Africa, mainly Nigeria, Benin, Togo and part of Ghana. The vast majority of this population are from Nigeria, where the Yoruba make up 24% of the country's population, making them one of the largest ethnic groups in Africa.

The history of the Yoruba begins in Ile-Ife. This kingdom was founded by the deities “Oduduwa” and “Obatala”, who are believed to have created the world. Oduduwa was the first divine king of the Yoruba people, and Obatala fashioned the first human beings out of clay. They believe that their civilization began at Ile-Ife where the gods descended to earth.

The Ethnic group became popular internationally due to their trading with the Portuguese which gave them guns for their trade. The Yoruba were invaded by the Fulani in the early 1800s, which pushed the people to the South. In the late 1800s, they formed a treaty with the Fulani people and were colonized by the British in 1901.

Ife was surpassed by the Oyo Empire as the dominant Yoruba military and political power between 1600 and 1800 AD. The nearby Benin Empire was also a powerful force between 1300 and 1850. Oyo developed in the 17th century and become one of the largest Yoruba kingdoms, while Ile-Ife remained as a religiously significant rival to its power at the site of the divine creation of the earth in Yoruba mythology. After Oduduwa's ascension in Ile-Ife, he had a son. This son later became the first ruler of the Oyo empire.

The Oyo kingdom subjugated the kingdom of Dahomey. It traded with European merchants on the coast through Ajase. The wealth of the empire increased, and its political leaders wealth increased as well. This state of affairs continued until Oba Abiodun, Oyo's last great ruler, engaged his opponents in a bitter civil war that had a ruinous effect on economic development and the trade with the European merchants. The downfall of the kingdom came soon after, as Abiodun became concerned with little other than the display of royal wealth. Oyo's empire had collapsed by the 1830s.

In 1960, greater Yorubaland was subsumed into the Federal Republic of Nigeria.

Like Oyo itself, most of the surrounding city states were controlled by Obas, elected priestly monarchs, and councils made up of Oloyes, recognised leaders of royal, noble, and often even common descent, who joined them in ruling over the kingdoms through a series of guilds and cults. Different states saw differing ratios of power between the kingship and the chiefs' council. Some, such as Oyo, had powerful, autocratic monarchs with almost total control, while in others such as the Ijebu city-states, the senatorial councils were supreme and the Ọba served as something of a figurehead.

Most of the Yoruba people take part in farm work. The men grow foods such as corn, yams, cocoyams, nuts, and cocoa, the last of which is a major cash crop. Men are also often traders and craftsmen as well. Women do less work on the farms, but are important traders. Their status traditionally depends on that of their husbands.

The Yoruba present the highest non-identical twinning rate in the world (4.4% of all maternities). They manifest at 45–50 twin sets (or 90–100 twins) per 1,000 live births, possibly because of high consumption of a specific type of yam containing a natural phytoestrogen that may stimulate the ovaries to release an egg from each side. Twins are very important for the Yoruba and they usually tend to give special names to each twin. The first of the twins to be born is traditionally named Taiyewo or Tayewo, which means 'the first to taste the world', or the 'slave to the second twin', this is often shortened to Taiwo, Taiye or Taye. Kehinde is the name of the last born twin. Kehinde is sometimes also referred to as Kehindegbegbon, which is short for; Omo kehin de gba egbon and means, 'the child that came behind gets the rights of the elder'.

Twins are perceived as having spiritual advantages or as possessing magical powers. This is different from some other cultures, which interpret twins as dangerous or unwanted

Although they are predominantly Christian or Muslim, a significant minority still follow their history of traditional practices and beliefs. The Yoruba people believe there are 401 deities. The Yoruba deities are called Orishas while God Almighty is called Olorun. Yorubas believe that when they die, they go to the realm of ancestors where they can still have influence on events taking place on earth.

A lot of Yoruba artwork, including staffs, court dress, and beadwork for crowns, are associated with palaces and the royal courts. Yoruba palaces are usually built with thicker walls, are dedicated to the gods and play significant spiritual roles.

Festivals are avenues to experience the richness of the Yoruba culture. Traditional musicians are always on hand to grace the occasions with heavy rhythms and extremely advanced percussion, which the Yoruba people are well known for all over the world. Praise singers and griots are there to add their historical insight to the meaning and significance of the ceremony, and of course the varieties of colorful dresses and attires worn by the people, attest to the aesthetic sense of the average Yoruba.